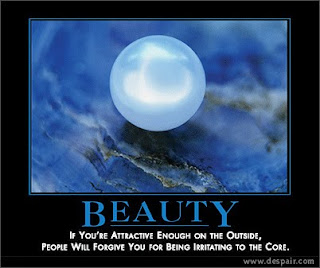 With so many dating shows, reality TV "of Love" shows, it seems that so many people have some very bad misconceptions of romance, love, and beauty. We have novels such as Twilight by Stephanie Meyer which basically says that love = stalking, controlling spouses and a romance based on obsession rather then actual chemistry or affection. We also have a somewhat recent drama between Chris Brown and Rihanna, where she basically shows the world that it's okay to stay with a man who beats the hell out of you.

Such messages corrupt and harm those who do not know any better. When I hear about a couple that goes through such hardships where the man is punching and biting his girlfriend, yet she humbly comes back to him because she loves him, this makes me wonder what goes through the minds of these people. We've seen it before on shows like Jerry Springer, and for some people this is a very ugly reality and something that occurs every day in their own homes. But because it's on Jerry Springer, where the "white trash" of America go up on stage and make complete fools of themselves for the world to see, we only associate such behavior from the stupid and unattractive people we've seen on the program. We immediately look down on the act, and we shun those people for going back to ones who abuse them, and we think to ourselves "that couldn't possibly happen to someone with more than half a brain".

But what about when it's Chris Brown and Rihanna instead of the Springer guests, and because it's Edward Cullen and Bella Swan instead of the white trash, the message changes. What is even scarier is that this sort of behavior, this neglect, obsession, abuse, and harm is being pushed to the side (and in some cases, even glorified) because the people in question are nice to look at. Say what you will about their personalities and characteristics (or lack of), but Chris Brown, Rihanna, and Robert Pattinson are not bad to look at. We would describe them as attractive, hot, and sexy. So we ignore their wrongdoings because of their beauty and good looks, either forget or condone the violent acts. With this, we are basically telling the world and our children, "It's okay, because they're hot and they love each other."

This message is displayed even strongly in today's media, but this time around the targeted audience are adolescents and young adults. Since we're already brainwashed since our toddler years to associate beautiful looks with happiness, the TV advertisements, reality shows, movies, television shows, the music industry, and most importantly the fashion industry do their best to reinforce this theory.

It is not only a broken record, but most of the time very hypocritical to say that "looks don't matter" and "it's what's inside that counts." When you really get down to the logical aspect of this argument, looks are temporary anyways. That hot guy you pick up in high school will not look quite the same when he's thirty years older, especially if he parties hard in his school years. That pretty girl may look smoking in that bikini when she's 18 but will she look that great when she's 50?

For the high classed/rich demographic, plastic surgery and spa treatments may help you with your aging process, yet how many people in the middle and lower class can afford such things? Many of us are lucky (especially in this economy) if we're able to make enough money to keep our homes or fill our refrigerators. Getting a liposuction, tummy tuck, or acupuncture once every two weeks is really a trivial matter that we can't bother ourselves with.

I'm not saying that women and men should not put time and effort into making themselves look good. When you wear something that you look good in, you'll feel good. When you feel good about yourself, you gain confidence. And when you look presentable, you'll look approachable. What I am saying, however, is that making your exterior as beautiful as possible and staying attracted only to the people who "look good," is not all that it's cracked up to be. I'm also saying that pardoning the sins of those who are easy on the eyes when you would have condemned anyone outside of that statistic for the same crime is ridiculous, unfair, and sends a harmful message.

Life isn't a fairy tale. It's time for a reality check.